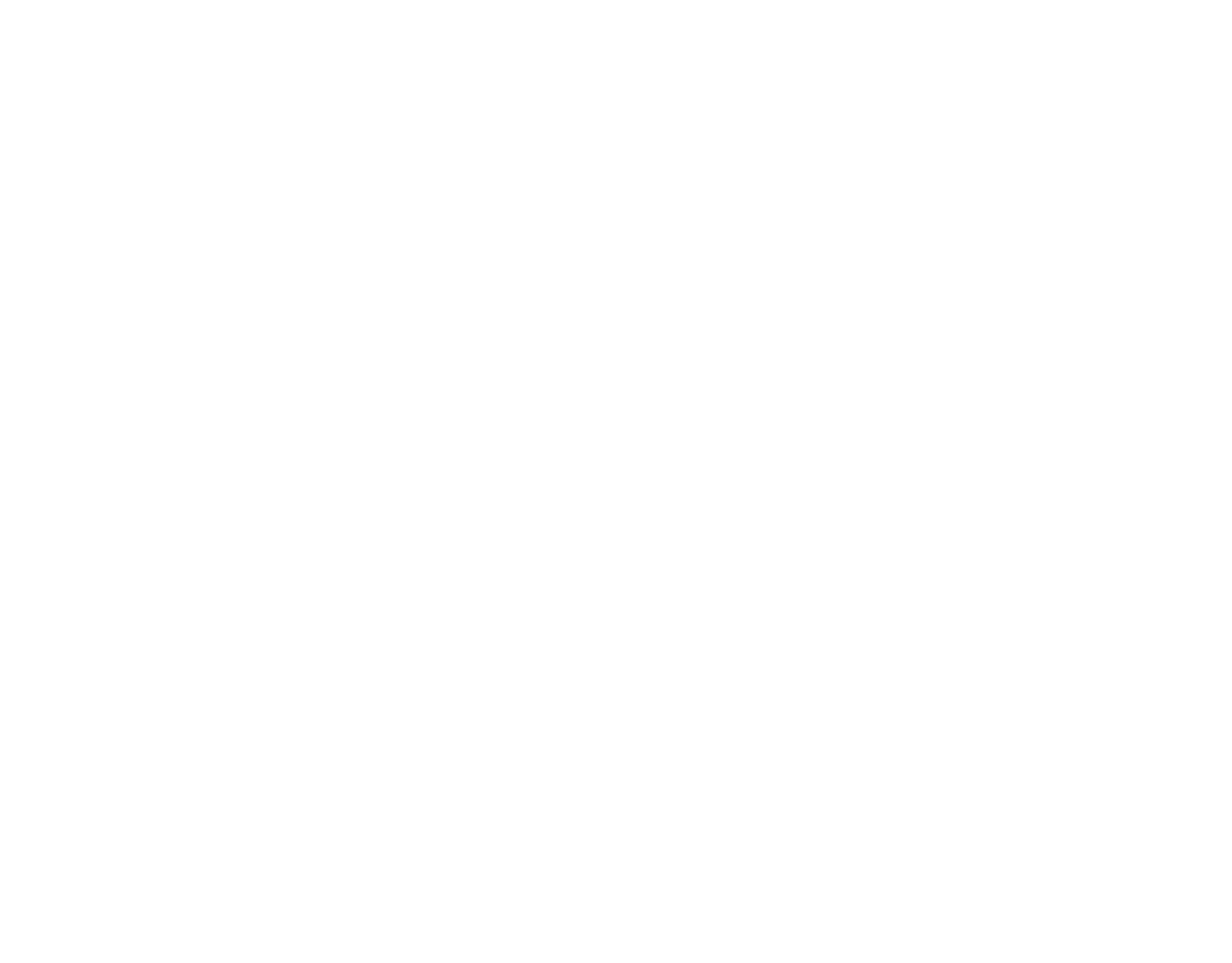 Sonia Milewska | Marijn Bril | Laura Palma | Hanna Hrynkevich | Hugo Sant’Ana
Are you there? re-imagines a former phone kiosk as a dedicated time and space for listening and connecting in a time of crisis. The project uses a simple phone call as an abstracted way to receive signals and experience distant ambiences in real-time. Inside the 1896 Fritz Koch Kiosk on Aalborg’s Nytorv, listeners pick up the phone and experience an intimate one-to-one sonic connection. In a context of conflict and war in Europe – during which people and infrastructures are under attack – the ‘old’ medium of phone calls is an important means of communication. Going back to a time when information technologies were not yet ubiquitous, listeners are invited to bridge geographical distances and understandings through sustained focus. Sound artists from Ukraine, Belarus, Poland, and Colombia perform a musical composition to reflect on Russian aggression against Ukraine and the experience of war in general. During the performance, each participant will be invited inside of the kiosk and will be given an opportunity to listen to a sound performance through a real analogue phone in real-time. The project aims to encourage international audiences to pay attention to the war from a personal viewpoint and review the instability of our reality. 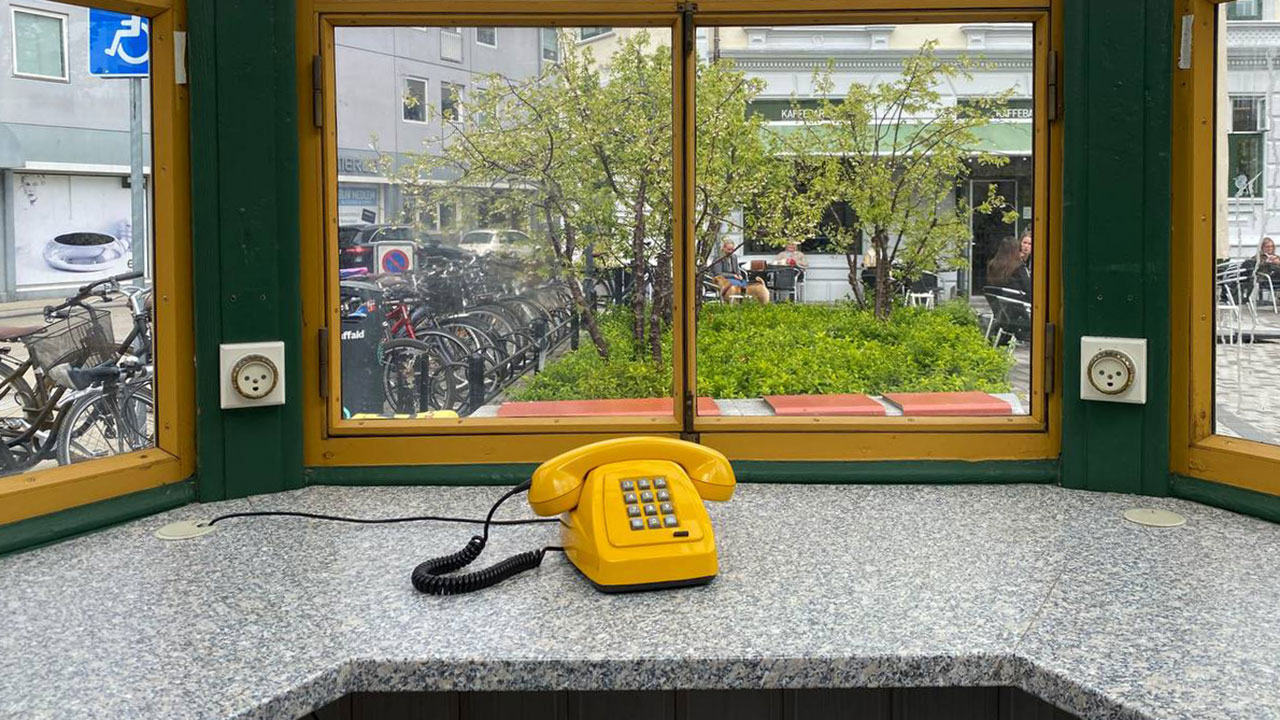 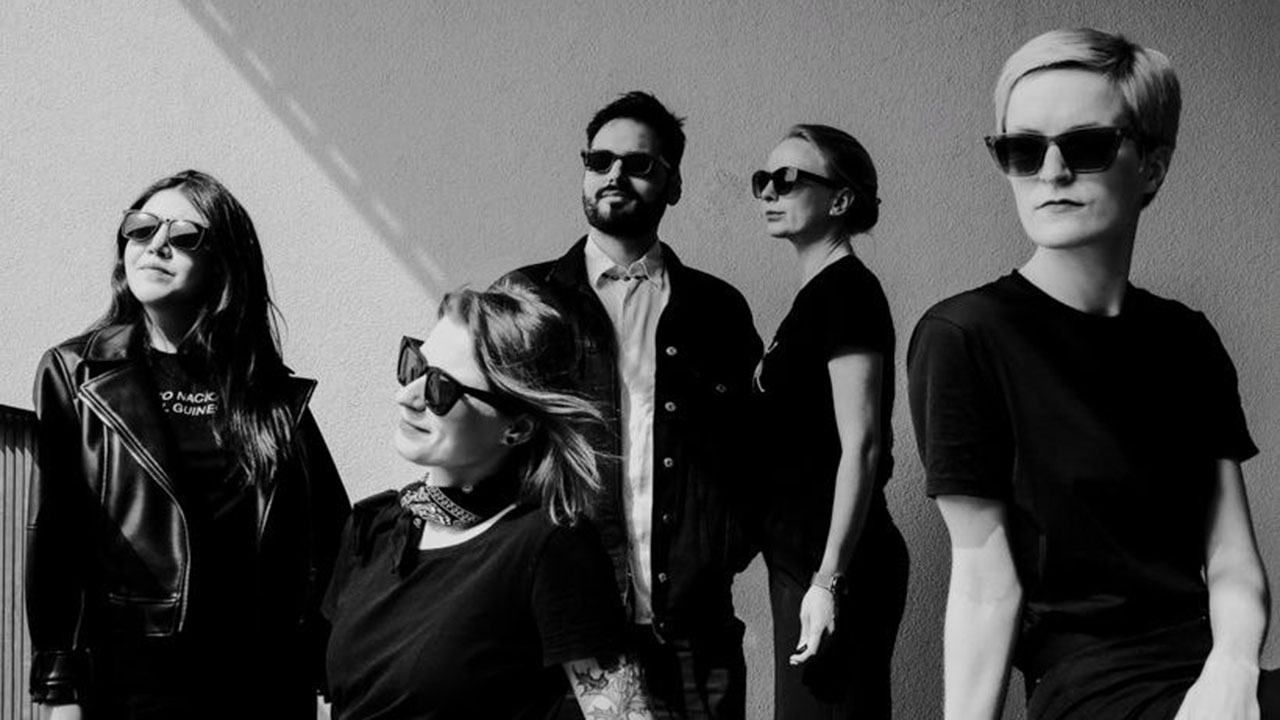 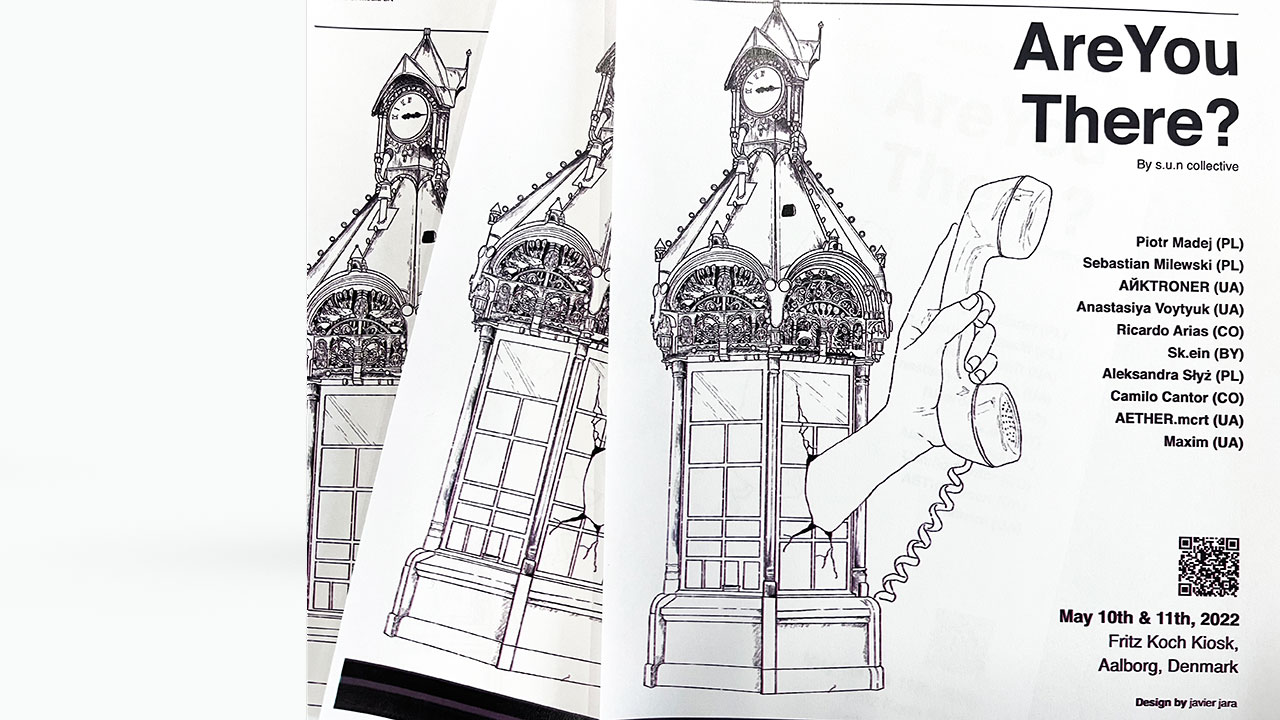 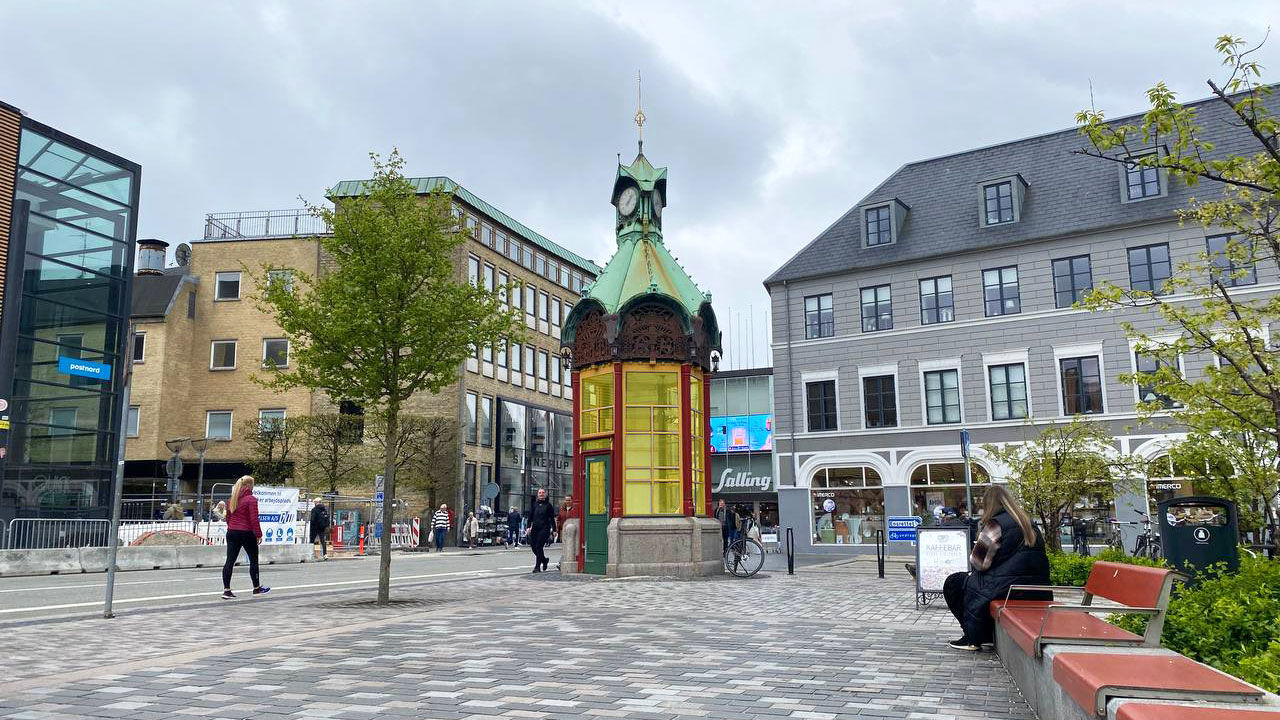 Piotr Madej (PL) | Sebastian Milewski (PL) | AЙKTRONER (UA) | Ricardo Arias (CO) | Sk.ein (BY) | Aleksandra Słyż (PL) | Camilo Cantor (CO) | AETHER.mcrt (UA) | Maskitol SAE (UA)
Piotr Madej
intermedia artist, composer, and sound engineer, member of Polish Society of Electroacoustic Music, member of artistic and scientific research collective group GrupLab, a double scholar of The Ministry of Culture and National Heritage of Poland in years of 2017 and 2019, since 2007 associated with Audio Art Festival, i! Gallery, ATA Scene, APTEKA Janicki Gallery, and he also collaborates with the Krakow Film Klaster. Graduate of the Intermedia on Academy of Fine Arts in Krakow, now working on a Ph.D. project in Doctoral School on Academy of Fine Arts in Krakow, he is also an assistant of the professor Marek Chołoniewski Audiosfera Lab at the Faculty of Intermedia.

intermedia artist, creator of installations, sound art, paintings, video art, animations based in Wrocław, Poland. Cofounder of booking collective Wkurvv and music group Młyn. In the years 2019-20 curator of Gallety MD_S in Wrocław. His work focuses on mediums and their relationships – he frequently employs well-known objects in ways that reveal their sarcastic, lyrical potential.

a personal project of musician and architect Sergei Kravchenko, who was born in 1982 in Minsk, Belarus. Since the late 1990s, Sergei Kravchenko has been playing in various musical groups as a percussionist (punk rock, reggae, kraut improv). One of the co-founders of the avant-garde Port Mone trio. Since 2012, Sergei has been working with field-recordings and prefers to work with samples recorded by himself.

photographer, designer, musician, born in Lviv, Ukraine. Creative director of Zemla.Studio, founder of ХАТНЄГРАННЯ (HOMEPLAYING) impro sessions project. He has two basic areas of interest, i.e. combining audio poetry with music accompaniment, that is sometimes close to hip-hop, experimental electronic and ambient music and melodic techno. The important component in his musical compositions is experimenting with ambient sounds and human voices. Since 2012, as an art critic and etitor-in-chief of PupZemli Magazine, he was promoting the lviv experimental scene, later in 2016 he initiated a research project [IN]DEPENDENCY about polish grassroots initiatives. He is regulary performing at festivals in Poland and Ukraine: Vox Electronica, Contrasts Contemporary Music Festival, Lviv MozArt, AudioArt Krakow, Wrocław European Capital of Culture, Noc Kultury Lublin.

project manager of Exploratorio, a public experimentation workshop at Parque Explora in Medellín,Colombia; a scenario for participation, training and skills development, based on technical and technological appropriation. Cantor is a digital artist and industrial designer with experience in the creation and administration of collaborative strategies on the Internet, and management of artistic projects related to experimentation and creation. He was part of the El Niuton collective, where he collaborated with content dedicated to making visible initiatives that interact between design, science, art and technology. Currently, he is part of Auditum collective where he works on sound experimentation.

Columbian experimental musician, improviser, composer, and sound artist. He studied composition and electroacoustic music with Chilean Gabriel Brncic, flute with Hiroshi Kobayashi and Joan Bofill, Sonology with Clarence Barlow, Konrad Bohemer, Paul Berg, Kees Tazelaar, Joel Ryan and Stan Tempelaars. He also holds a BA in Anthropology from Hunter College in New York City and a Master in Fine Arts (MFA) from the same university. His work focuses on the practice of improvisation; the use of unconventional sound sources, both acoustic and electronic; and collaborations. His work is presented in compositions, installations, sound objects, sound interventions, concerts, curatorships and writings.

born in Krasnodon, Ukraine. M.A. in automatization and computer technologies, East-Ukrainian National University Lives and works in Kyiv, Ukraine. One of the head members of Kharkiv Hackerspace (KHackerspace). Member of aDDDlab. R&D engineer.

Sonia Milewska
Sonia Milewska is a media art researcher and conservator. She was a member of the team that restored E. Ihnatowicz’s cybernetic sculpture Senster (1970), which was the subject of her diploma in Conservation of Works of Art from the Academy of Fine Arts in Kraków (2018). She has been working as a conservator with objects from private and public art collections in Poland since 2012. Milewska was the head of the visual arts department at Polish art magazine (2016-19). She is interested in new technologies, living archives, and media art preservation.

Marijn Bril is a media curator and researcher. With an interest in the complexity and absurdity of digital culture, she explores topics ranging from networked images to digital metaphors. She reflects upon these predominantly through curated programs, essays, and exhibition interventions. Marijn has worked with IMPAKT, The Wrong Biennale, inter media art institute, Young Curators Academy, and Institute of Network Cultures.

Laura Palma is an artist with focus on Media Arts from the Universidad de los Andes, Bogotá, Colombia. She’s worked in several projects encompassing photography, video, animation and creating visual companion pieces for musical groups and theater plays. Furthermore, she worked as an events and communication manager of the Art Department of Universidad de los Andes. Currently, is the producer and part of the curatorial comitte of Voltaje, Art and Technology Salon, and she’s undertaking the Erasmus Master Programme Media Arts Cultures.

Hanna Hrynkevich is a photographer, journalist, and cultural PR manager. Was born in 1990 in Minsk (Belarus). Graduated from the Belarusian State University, the Faculty of Journalism. In 2015 began to work on personal photo projects (“Happiness is…”, “The Place”, “Born in the USSR”, photo book “Agejczyk”), combining documentary and art approaches. Research interests: post-photography, ethics of photojournalism.

Hugo Sant’Ana Lima is an experience designer, researcher and artist from São Paulo, Brazil. Active in South America art market, he graduated in Media Studies at Fundação Armando Álvares Penteado (FAAP) in 2016 and started producing independent and commissioned art exhibitions for galleries, art fairs and collectives since then. During the 2019 pandemics, he specialized in User Experience Design and started focusing his work on the digitalisation of the art world, creating unique online experiences for art auctions and video streaming. In 2021, he was awarded full merit Erasmus scholarship to research future digital solutions for Media Arts Cultures.